Schönberg as a sonic experience 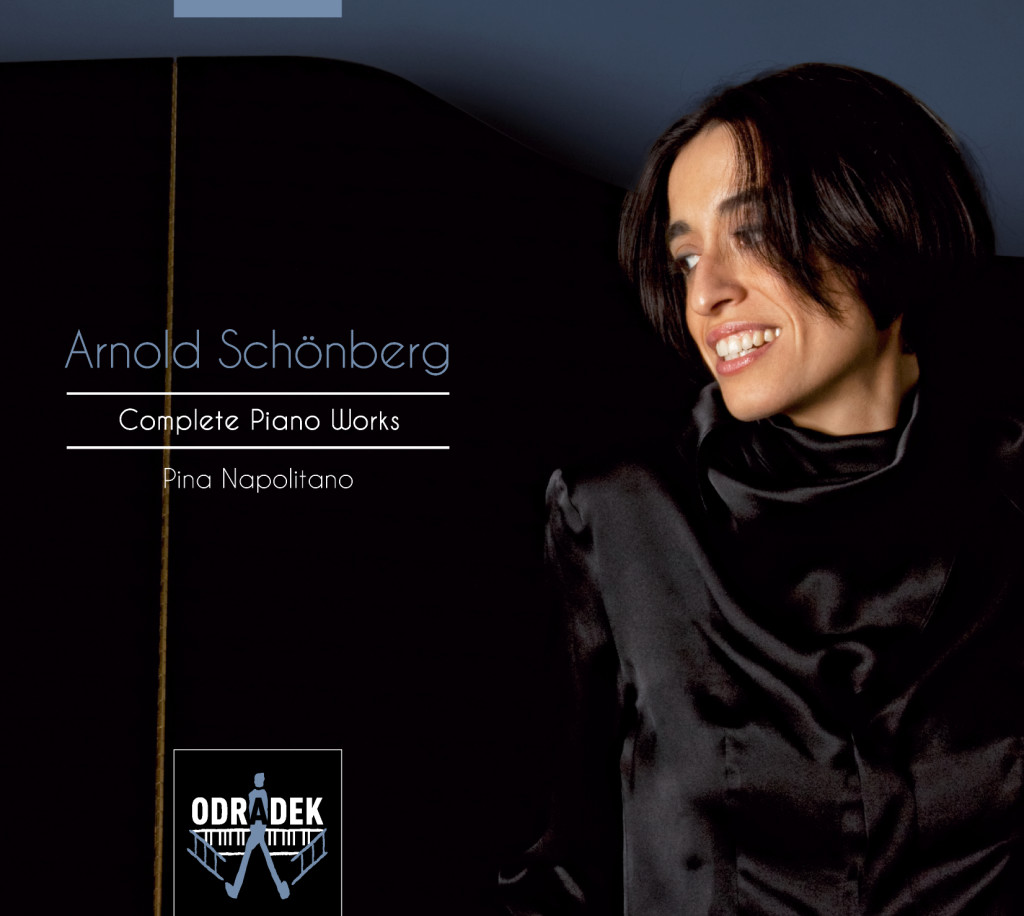 In her recording of Schönberg’s piano works, Pina Napolitano keeps the balance between overarching lines and attention to detail.

Any attempt to record the complete works for solo piano is accompanied by the need to delve into unparalleled stylistic diversity. The piano works of Schönberg depict almost every stage of his development as a composer on his way towards the twelve-tone scale. They range from the already atonal “Three Piano Pieces” op. 11, that are nevertheless still rooted within the genre of romantic character pieces, via the conceptually serial op. 23, to the ultimately dodecaphonic pieces op. 33a and 33b. In between those hallmarks we find the “Six Little Piano Pieces” op. 19, as well as the “Suite” op. 25, based on baroque dances.

With this recording, released by Odradek Records, the Italian pianist Pina Napolitano faces the challenges of the not very extensive, but extremely varied repertoire, to portray the many aspects of Schönberg’s compositional process. By doing so, she contributes invaluably to the reception of this music, music that is still struggling for a foothold in today’s musical world, even though it can hardly be considered “new” almost 100 years after being composed. The fact that Pina Napolitano does not only include a few pieces of Schönberg into her repertoire, but actually presents the complete collection of his piano works, makes her a real exception within the recording industry.

The requirements to perform non-tonal music, especially when including complex polyphonic structures like Schönberg’s music, are to make the structure of the work comprehensible to listeners and to guide them through the intricate web of musical lines so they can follow the musical development. Pina Napolitano meets the requirements on many levels.

First of all, her uncanny articulation needs to be mentioned, allowing her a precise rendition of Schönberg’s indications in the musical text, thus enabling the listener to keep the individual voices apart. Also when looking at Napolitano’s treatment of tempo, it’s apparent that she only varies from the original tempo when explicitly asked for by the composer. The result of this is a high degree of clarity, because she doesn’t distort rhythmical patterns by means of tempo rubato.

Napolitano’s ability to articulate clearly and to keep a strict tempo proves to be especially useful in the “Three Piano Pieces” op. 11, in which the precise rendition of the musical phrases is a prerequisite to allowing the listener to recognize the main musical idea over the course of the piece. In this way the pianist is able to perform even the many-layered third piece transparently. Prior to that, Napolitano accentuates the romantic element of the two preceding pieces, both of which are carried by a lyrical atmosphere, and convinces the listener with her expressive and warm touch.

It is due to her highly developed sound image that the “Six Miniatures” op. 19 turn into a very special experience in her interpretation. Napolitano allows each of the pieces – often less than a minute in duration – to shine in a different light, creates a very specific atmosphere in each of them, so that the fleeting visions of the cycle appear as quiet parts of a multi-facetted total picture. Napolitano impresses with her almost infinite ability to differentiate the piano, allowing Schönberg’s dynamic markings, ranging from a single piano to a triple piano in a very condensed space, to come to full bloom. Napolitano creates an intimate, almost other-worldly, sphere of sound in these six short pieces, and that is mostly thanks to her very refined touch.

In the “Suite” op. 25, Napolitano copes with completely different musical characters. The pianist successfully transfers the lightness and liveliness of baroque dances to Schönberg’s atonal way of writing. In her reproduction, Napolitano accentuates the friction between the archaic form of the movements of the suite and the progressive tonal language of the music of the Second Viennese School, which lends this extensive piece it’s charm.
As in the other works, Napolitano proves once again to adhere strictly to the original text and employs all the available means to realize Schönberg’s precise performance indications. She masterfully accomplishes the feat of capturing every detail, while at the same time never losing sight of the big picture. Especially the “Suite” presents itself in Napolitano’s interpretation as a coherent unity, differentiating itself within its formal limitations into contrasting shapes and characters.

What worked like a charm in op. 19, proves to be problem in op. 23 and 33: Napolitano loses the harsh, almost rough forte-outbreaks and dynamic increases, that form an integral part of the music. The promise of the piano-sections, which are very nuanced, is not held by the forte-sections. Almost all passages in which Schönberg, whose dynamic specifications are always well-considered and an inseparable element of the composition, asks for an exceeding of the predominant volume, end up a bit too flat and not drastic enough in Napolitano’s rendition. This doesn’t mean that she’s just ignoring the instructions, but her forte isn’t perceived as a contrast, or as being the counterpart of the quiet register. That is why you would wish for more courage to shape these dense and unclear sections, to clearly shape the main line distinctively from all the other voices. As much as Napolitano provides us with exemplary articulation that leads to clarity and transparency in Schönberg’s compressed structures, her dynamic realization of the different layers of the setting lacks.

If Napolitano’s approach to Schönberg can be criticized then it’s due to her fixation on the roundness and softness of the piano sound. Her shyness towards dynamic boldness, which sometimes should cause the beauty of the overall sound to suffer, threatens to flatten the especially complex pieces of op. 23 and 33.

But it’s the same delicate touch of the pianist that lets the fragile miniatures op. 19 blossom. Thanks to her effort to realize Schönberg’s musical text in all its facets, to shape each detail of each piece and to bring tonal sensibility to music that is often performed indifferently by other performers, Napolitano’s recording of Schönberg is recommended for everybody who is interested in and enthusiastic about the piano works of the composer…